The following is a letter drafted by the SSPC Board of Directors in response to the United Nations’ Special Rapporteur on Torture, currently in process of submission for publication.

As members of the Board of Directors of the Society of the Study of Psychiatry and Culture (SSPC), we represent considerable international experience with torture survivors, care of patients with mental illness, and cultural issues related to mental health. We are concerned by the recent publication of the UN Report by the Special Rapporteur on Torture (SRT), Juan Méndez, A/HRC/22/53 dated 1 February 2013, which adds involuntary confinement and treatment for mental illness to the definition of torture. The report is apparently based upon SRT visits to Tajikistan and Morocco, with other visits planned or requested, including to the US.

While we abhor and condemn the political use of torture as well as the inappropriate use of confinement, we are convinced that to label problems with mental health care as ‘torture’ trivializes the concept in the Convention Against Torture (CAT). It may divert attention and limited resources from the care of survivors who bear the physical, emotional, and spiritual wounds of political torture. The SRT report applies to all 151 countries which have signed the CAT, placing countries which misuse psychiatry together with countries that legitimately provide psychiatric care to protect lives.

The SRT report also has serious implications for humane care of people with severe mental disorders. In the US, as well as in many European countries, the focus on individual rights already limits the ability of the mental health professions to effectively help persons with acute episodes of mental illness who are at risk of harming themselves or others. To “safeguard free and informed consent on an equal basis for all individuals without any exception” (Recommendations 85 (e), page 21) would preclude confinement of those persons who require emergency stabilization or longer term treatment. Each of the United States has a legal framework permitting this confinement but including legal safeguards to prevent misuse and violation of individual rights. A/HRC/22/53 precludes attempts to protect and help individuals with severe mental illness through temporary confinement and would “impose an absolute ban on all forced and non-consensual medical interventions against persons with disabilities . . . for both long- and short-term application” (Recommendations 89 (d), page 23). Ironically, much recent discussion in the US focuses on the need to further restrict the individual rights of persons with mental illness by appropriately confining and treating them to protect themselves or others.

The SRT recommends revision of “the legal provisions that allow detention on mental health grounds or in mental health facilities, and any coercive interventions or treatments in the mental health setting without the free and informed consent by the person concerned” (Recommendations 89 (d), page 23). The consequences of requiring informed consent under all circumstances would be to deny access to emergency care for many. Beyond the initial emergency, involuntary confinement and treatment require judicial review. In most situations involuntary confinement is brief and the oversight of judicial intervention or third party agreement ensures humane and ethical treatment. While the mental health system in the US is far from perfect, failure to provide care increases the suffering of those whose illness has impaired their insight and ability to provide informed consent.

We believe a distinction should be made between the “disabled” and “the mentally ill.” Although the Convention on the Rights of Persons with Disabilities seems to be the legal basis for the recommendations in A/HRC/22/53, the UN resolution of 1995 regarding Protection of the Mentally Ill already provides very strict and specific requirements for involuntary confinement. Along with the Convention Against Torture, these conventions, the International Convention on the Elimination of All Forms of Racial Discrimination, and other UN documents address the inhumane, inappropriate, and exploitative use or denial of healthcare. It is unclear what A/HRC/22/53 adds beyond adequate enforcement of these conventions.  A/HRC/22/53 is an inconsistent political statement, based neither upon a broad view of the issues nor upon research supporting the recommendations. For those in need of psychiatric care, and for torture survivors in particular, the negative implications and potential consequences are enormous.

The Board of Directors, Society for the Study of Psychiatry and Culture

Call for Papers for the 2014 Meeting

The call for papers for the 2014 SSPC meeting, which will be held in San Diego from May 15 to 17, 2014 is now open. The theme of the meeting is Trauma, Recovery and
Culture. The deadline for abstract submission is September 16, 2013. This is an absolute and non-negotiable deadline. Therefore, potential speakers are urged to
submit abstracts as soon as possible. We welcome proposals for symposia, individual presentations, and a poster session.

There is an on-line abstract submission form posted at the SSPC website, www.psychiatryandculture.org, along with specific instructions for completing your proposal.

1) increase the focus on cultural formulation and integration,

4) use multiple formats for learning sessions,

5) do not focus on acquiring knowledge about specific cultural groups,

6) it is important to of explore self-identity in a safe setting,

7) do not add more work for residents,

8) consolidate, and present a variety of perspectives.

Psychiatry in Multicultural Settings: Training and Practice, a symposium presented at the 2013 APA meeting

SSPC was invited by APA President Dilip Jeste to sponsor a symposium at the 2013 American Psychiatric Meeting in San Francisco. The first presentation was Renato
Alarcón’s on “Culture and Cultural Components in Medical Students and Psychiatric Residency Training”, in which he reviewed critical issues in global psychiatry that necessitate a cultural perspective within psychiatry, such as the global realities of an increase in psychiatric conditions, the need to foster psychiatric vocations, and the need for a “polyvalent psychiatrist.” Furthermore, the importance of psychiatrists being skilled in psychotherapy, the need for consolidation and balance between humanism and advances in neuro-scientific knowledge, and the need for international cooperation and coordination between mental health providers, also entail an appreciation of the role of culture in psychiatric training. He also reviewed the ACGME core competencies in psychiatric training and how they mandate an understanding of culture in various aspects of psychiatric training. Dr. Alarcón delineated the importance of cultural psychiatry to the Milestones Project promoted by the ACGME and the ABPN. Reviewing the emphasis on Knowledge, Attitude, and Skills training within medical schools and psychiatric residencies, he outlined specific goals within both medical student and psychiatry resident training for each of these domains and reviewed the various didactic tools that can be utilized to accomplish these goals. He emphasized the appropriate utilization of different kinds of settings, including psychotherapy activities (specifically in “cultural psychotherapy” settings) and individual demonstrations by different clinical team members, including interpreters. In addition he outlined complementary/reinforcing activities, such as journal clubs, movie-based discussions, experiential groups, historiographic “therapy” activities, and psycho-cinema and psychodrama activities that can further enhance cultural psychiatry training.

The next speaker was Karen Mu (PGY III University of California at San Francisco) on “Cross-Cultural Training: A Resident’s Perspective.” Karen began by outlining the factors that both encouraged and discouraged an interest in cultural psychiatry among psychiatry residents. She then reviewed the history of cultural psychiatry teaching at UCSF. The psychiatry department at UCSF is in the process of reviewing and revising their training in cultural psychiatry and is utilizing Kern’s approach to curriculum development, which she outlined. She then described programs at NYU and UC Davis and how these provide models for program development. Reviewing feedback from UCSF residents, Karen made 8 points to be considered in developing a cultural psychiatry program (see box, left). Based on this feedback, she then introduced the program at UCSF, including specific goals and didactic methods. A key element of the UCSF program is the Cultural Workshop. She then described work toward a cultural track program.

The third speaker was Larry Wilson, MD who spoke on “The Value of Global Health Experiences in Psychiatry Training and Practice.” The increased ease and comfort of global travel has opened access to direct experience in cultural diversity within a psychiatric setting for many. He outlined the various forms and types of overseas psychiatric experience. These included short-term and longer term varieties of clinical experiences, ranging from brief consultations as a member of a team or solo to sabbaticals. He outlined the process by which these are available to residents and practicing psychiatrists. He also emphasized the importance of cultural sensitivity and the use of cultural brokers. He then described his own experiences consulting in South Asia, Southeast Asia, and the Pacific. He talked sbout the benefits that come from such experiences and stressed that while such experiences can be a fascinating and enriching personal and professional adventure, it is very important to guard against “Psychiatric Tourism.” When done with the proper attitude, this work can help a psychiatrist become more culturally aware and effective as a healer, while sensitizing the psychiatrist to cultural and ethnic influences on both ill and healthy persons back home. 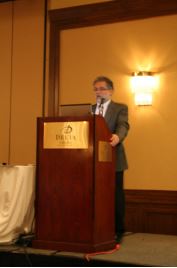 The next speaker, Roberto Lewis-Fernández, presented “Use of the Cultural Formulation to Train Psychiatry Residents.” Roberto emphasized that teaching cultural psychiatry requires the right combination of didactic and experiential methods. He then commented on the fact that in the US there is no standard for teaching cultural psychiatry, reviewing the factors that impact upon this effort and results in variation between programs. In contrast, he reviewed the Canadian Psychiatric Association Guidelines and the model program at McGill University. He then summarized data gathered by the GAP Committee on Cultural Psychiatry on the diversity of approaches and teaching experiences at 20 US psychiatry programs. He described the Cultural Formulation course attended by PGY II residents at Columbia University’s psychiatry program and possible adjustments. Reviewing the DSM-5 Cultural Formulation Interview, he discussed the lessons learned at Columbia. He concluded that the CFI provides a deployable skill set founded in theoretical concepts, but there is a need to strike a balance between theory and experiential learning across the continuum of training. 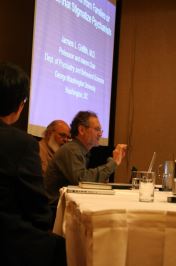 Finally, Jim Griffith talked about “The Doctor-Patient Relationship: Navigating Ethnocultural Differences with Patients and Families During Psychiatric Treatment.” He described cultural conflicts within psychiatric treatment with emphasis on clinical situations involving patients who hate or fear psychiatry. He argues that doctor patient conflicts in the setting of ethnocultural differences are fundamentally different from the transference/countertransference conflicts seen in psychodynamic psychotherapy. He outlined two strategies for countering ethnocultural transference and gave useful “rules of thumb” for managing ethnocultural countertransference, as well as common errors made when working with ethnoculturally different families. As a theoretical framework for this discussion, he described evolutionarily-based neurophysiological systems of identity and relatedness. He then detailed a difficult case involving such a conflict and engaged the audience in examining alternative responses.

The purpose of the NIMH Mentored Career Development Award to Build Research Capacity in Global Mental Health is to provide support and “protected time” (three
to five years) for an intensive, supervised career development experience that will facilitate the entry of early career investigators into the field of global mental health research and lead to research independence. The NIMH invites applications from advanced postdoctoral and/or recently appointed early research scientists usually with a Ph.D., M.D., or equivalent degree and no more than six years of postdoctoral research experience at the time of application) in biomedical, behavioral, or clinical sciences who are pursuing global mental health research careers in areas supported by the NIMH.

By the time of award, the individual must be a citizen or a non-citizen national of the US or have been lawfully admitted for permanent residence (i.e., possess a currently valid Permanent Resident Card USCIS Form I-551, or other legal verification of such status).

The entire announcement can be viewed at http://grants.nih.gov/grants/guide/rfa-files/RFA-MH-14-120.html