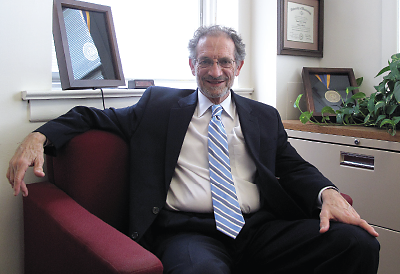 A psychiatrist uses his multicultural experience to help political refugees from other countries and train residents to work with these victims.

Thirteen years ago, “Griff,” as he is affectionately called by his colleagues, had an epiphany during dinner at an Ethiopian restaurant in Washington, D.C.

That city, he knew, wasn’t just the nation’s capital, but home to many thousands of immigrants. In Washington, D.C., and its suburbs, there were about 40,000 Afghans, 250,000 people from Central America, and more Ethiopians than anywhere outside of Ethiopia. Moreover, an estimated 40,000 of these were political refugees who had been tortured by the governments of their home countries, with many developing mental health problems as a result. So shouldn’t he, James Griffith, M.D., and his colleagues at George Washington University (GWU) be doing something to help them?

Griffith set out to make that idea a reality.

First he and his colleagues connected with the Center for Multicultural Human Services, now a program of Northern Virginia Family Services, in Falls Church, Va. The center was established to respond to the myriad problems facing immigrants and refugees, but had no psychiatric component. Griffith and his colleagues created a partnership with the center, where he and GWU psychiatry faculty members Lynne Gaby, M.D., and Anjuli Jindal, M.D., would supervise their psychiatry residents in weekly clinics.

Over the past 13 years, Griffith, Gaby, Jindal, and the residents have evaluated and treated immigrants, refugees, and torture survivors during 22,000 patient visits.

Patients who benefited from the program stay fresh in his memory, Griffith said during an interview in his office. Among them, he noted, were a former Sandinista soldier from Central America, a Khmer survivor of the Pol Pot killing fields of Cambodia, Bosnian survivors of ethnic cleansing, Iraqi political prisoners of Saddam Hussein, genocide survivors from Rwanda and Congo, as well as African physicians tortured for advocating human rights in their home countries.

“Among those politically tortured, we have treated patients from perhaps 60 countries,” Griffith said. “They were interrogated relentlessly; deprived of food, water, and sleep; waterboarded; sexually assaulted; subjected to beatings and electric shocks; or forced to commit sexually degrading acts with family members—all efforts to silence or destroy their capacity to speak out or challenge their governments.”

“Yet it often has been amazing, after psychiatric treatment was initiated, how rapidly these individuals’ posttraumatic symptoms improved,” Griffith pointed out. “Psychiatrists are mostly accustomed to treating patients whose psychiatric illnesses stem from genetic risk factors and early childhood trauma. Survivors of political torture often have been emotionally healthy political leaders and activists with no prior risk factors for mental illness. A number have been physicians or other health care professionals in their home countries. It is a powerful lesson for our psychiatry residents to witness how extensively human beings can recover from infliction of tremendous horror and pain.”

To complement the clinical training at Northern Virginia Family Services, Griffith and his colleagues developed an innovative residency curriculum to train psychiatrists for work with patients from other countries. “We teach clinical methods that are portable across different cultures and that can be used in resource-poor environments where efficiency and effectiveness are both priorities,” Griffith said.

Perhaps surprisingly, he has encountered little opposition to the cultural-psychiatry focus of his residency program and its global mental health track. “One reason why is probably because they are a good fit for our Washington environment, given our patient populations, faculty, and local resources,” he speculated. “It also helps that I am program director for the residency,” he added with a chuckle.

Griffith has found the multicultural clinical and training programs he has launched very rewarding. “In many ways, our refugee work is a return to the ancient notion of being a physician, because being a physician has always been about relieving suffering. Refugees may be depressed, or they may have PTSD, but mostly they suffer from demoralization, loneliness due to being away from home, stigma, or grief due to many losses. Psychiatrists have knowledge and skills for relieving human suffering that extend well beyond treating psychiatric disorders.”

“We have what may be the country’s only psychiatry global mental health curriculum that spans all four years of training,” Griffith reported. He noted that residents can spend part of each residency year in regions as diverse as the Middle East, Africa, and Asia. “A lot of medical anthropology, ethnopharmacology, human-rights advocacy, and transcultural psychiatry is embedded in our residency curriculum for all our residents.”

Indeed, there appears to be only one other multicultural psychiatry program like that of Griffith’s in the United States—the Intercultural Psychiatric Program at Oregon Health and Science University. James Boehnlein, M.D., a professor of psychiatry at Oregon Health and Science University and a participant in that program, confirmed that this is the case.

“I very much admire Dr. Griffith’s work with immigrants and refugees because he views treatment in a comprehensive manner,” Boehnlein said. “He focuses on restoring dignity, hope, and meaning in the context of the person’s family, culture, and community. He also correctly sees the role of the psychiatrist comprehensively as someone who can use medication, individual and family psychotherapy, along with the skills of allied health professionals, to reduce symptoms and suffering.”

And the best is yet to come, Griffith believes. “My biggest concern is to find a way to endow the program with philanthropic funding, because immigrants and refugees who are not yet citizens largely have no reimbursable services.”

See the whole article and additional information at http://psychnews.psychiatryonline.org/newsArticle.aspx?articleid=1377070

Copyright © 2012 by the American Psychiatric Association. Reprinted with permission from the October 5, 12012, issue of Psychiatric News.