Members in the News: Quick Response, Cool Demeanor Is Psychiatric Profile of Courage 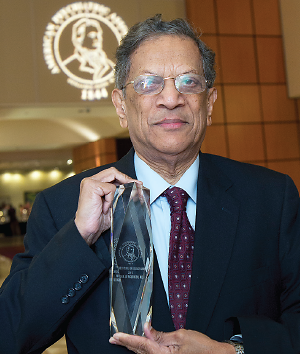 A psychiatry resident’s reaction to a patient who opened fire in the emergency room diffused the situation, saved lives, and won him a prestigious APA award.

Ignoring the considerable personal risk in which he was placing himself, John de Figueiredo, M.D., diffused what could have become a violent and tragic incident in his hospital’s emergency department. His actions won him considerable praise from his department chair and colleagues, as well as this year’s Profile of Courage Award from the APA Assembly at its November meeting in Washington, D.C.

During his psychiatry residency at Johns Hopkins in 1979, de Figueiredo was on call in the psychiatric emergency department when a patient waiting for a transfer to another facility because beds were unavailable at Hopkins became extremely agitated. A security guard was called, and the guard, a nurse, and de Figueiredo escorted the patient to a seclusion room for evaluation and treatment. Once in the room, the patient struggled with the guard, seized the guard’s loaded gun, and began shooting. (Guards were supposed to carry unloaded guns, but this guard had forgotten to remove the ammunition.)

De Figueiredo pushed aside several patients who were waiting to be seen and pointed them toward a safe area. He then walked to the emergency department’s medical and surgical area, where he told staff to barricade themselves in offices and keep the doors shut. At that point, several shots were heard, followed by silence. Returning to the psychiatry emergency area, de Figueiredo came upon the bodies of the patient and security guard lying in pools of blood. The security guard had been shot five times with his own gun in a struggle with the patient.

De Figueiredo calmly returned to the medical/surgical area, instructing staff to come out of the rooms in which they took shelter. He then divided them into two teams, telling them that there were two seriously wounded people that needed to be taken into surgery immediately.

The patient died that night, and the security guard died a week later.

De Figueiredo returned to work the next day, despite being told to take the day off. Soon after the events, the head of the psychiatric emergency department, Michael Kaminsky, M.D., called the resident’s conduct “exemplary,” and department chair Paul McHugh, M.D., referred to de Figueiredo as a hero.

In accepting the award last month, de Figueiredo praised McHugh for his leadership and mentorship and for helping him move on after this tragedy. “When you are a
resident, you hope a tragedy will not occur on your watch. But sometimes a tragedy happens, and when it does, it helps to have a supportive chairman and a caring faculty,” he said. “I was fortunate to have a truly outstanding and supportive chairman in Dr. Paul McHugh, who has been a source of inspiration for me throughout my professional life.”

“To comfort, to heal—we psychiatrists do it all together, we do it all the time, and for us they are one and the same,” de Figueiredo said.

He is now an associate clinical professor of psychiatry at Yale University School of Medicine and an Assembly representative from the Connecticut Psychiatric Society.

Copyright © 2012 by the American Psychiatric Association. Reprinted with permission from the December 21, 2012, issue of Psychiatric News.